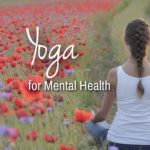 Since the early 1970s, alternative forms of stress-reduction have been studied as possible treatments for depression and anxiety. Yoga didn’t receive much attention on this thought until it became overall more popular in the past decade. Classes can vary from gentle to strenuous or challenging. The most common type of yoga practiced in the US combines poses, controlled breathing and deep relaxation. Many of the practices found within yoga can be related to coping skills and techniques to help someone experiencing anxiety or depression.

Stress can be measured by testing the level of salivary amylase in saliva. Salivary amylase is an enzyme that breaks down starch into sugar. The amount produced links to stress. In a Japanese study, elderly people in a nursing home were offered yoga classes. They were studied for anxiety and their saliva tested. Those that participated in yoga had a huge improvement in their mood and anxiety, and they had much lower levels of salivary amylase.

In a study performed by Brigham and Women’s Hospital in Massachusetts, high school students were given the option to either take a typical physical education semester or yoga. The kids who took yoga were significantly more able to control their anger and to show improvements in sleep. In addition, the students in the control group showed worse symptoms over time, while the yoga group showed the same or better results.

They started with a 3 week observational period then moved onto a 3 week intervention period. Finally, the kids completed a 3 week follow-up period.

There are many benefits of this calming exercise and Lifeline Connections includes this in many treatment areas.

It’s important to stay healthy and take precautions for your health.

If stress begins to impact your daily life and taking breaks or connecting with loved ones doesn’t help, reach out get support. There are mental health professionals here to work with you every step of the way and online support groups. Learn more about our mental health programs.

Effect of yoga on mental health: Comparative study between young and senior subjects in Japan

Evaluation of the mental health benefits of yoga in a secondary school: A preliminary randomized controlled trial