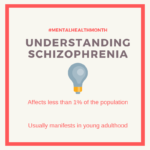 Although schizophrenia is not as common as other mental health illnesses, it carries a significant amount of stigma and is often what people think about when they imagine mental health disorders. In fact, only 1 % of the population suffers from the disorder. The main symptoms for the disorder are delusions and visual or audible hallucinations, and serve as the main indicators of illness. These can be very debilitating symptoms that have an immediate impact on an individual’s lifestyle including work, school, and family interactions.

Schizophrenia is a mental and neurodevelopmental disorder that is highly influenced by genetics. Researchers suspect that hundreds of genes could be implicated in the development and predisposition of the disorder. It can also be triggered by environmental factors like marijuana. Prenatal exposure to malnutrition and viruses also increase an individual’s risk. Symptoms of schizophrenia can be present with other types of mental disorders; for example, a subset of people diagnosed with depression might also show signs of psychotic symptoms, like hallucinations or delusions.

There is a common misconception that people diagnosed with schizophrenia are dangerous to those around them, but this is seldom the case. This belief often stems from the portrayal of those with schizophrenia on social media and television. These are the minority of cases, but people do not see the more common presentation of schizophrenia poses no threat to others and it is this stigma that keeps them from discussing their diagnosis with others. With the proper medication and treatment, people with schizophrenia are able to hold stable jobs and carry through with their own personal goals like everyone else.

Episodes of schizophrenia often come and go which can cause abrupt effects in an individual’s life, having a proper treatment plan can help when these events arise. The main treatment for schizophrenia is antipsychotic medication coupled with psychotherapy which bring the various symptoms under control. Once on medication, people suffering from schizophrenia have to take the medication for the rest of their life to keep it under control. Schizophrenia is a very complicated disorder that has yet to be fully understood by the researchers and doctors who diagnose it.

If you or someone you know is struggling with a mental health issue, please feel free to contact the professional team at Lifeline Connections for help! Getting yourself help, whether it is through self-help or by reaching out to professionals is an important part of recognizing that you are struggling and is a good step forward to get the help that you need. You can visit Lifelineconnections.org or call 360.397.8246 for more information.