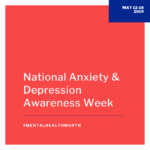 Mental health disorders have been increasingly accepted in our culture. The high prevalence of anxiety and depression amongst people has made it increasingly important to continue education surrounding mental health and possible avenues for treatment. Depression and anxiety are both known to have a variety of causes with substantial genetic involvement. For example, depression is considered to have 30% of a genetic involvement with environmental stressors increasing the likelihood that someone will develop the disorder.

One of the most common ways used to tackle mental health disorders is prescription medications. For depression, and sometimes anxiety, people are often prescribed SSRIs (ex. Prozac or Zoloft), also known as selective serotonin reuptake inhibitors, that work specifically in the brain on serotonin receptors. Depression has been implicated with dysfunction of monoamine neurotransmitters of which there are three: serotonin, norepinephrine, and dopamine.  Any or all three of these are suspected to be involved in the development on depression. However, this can differ from individual to individual which is why it is so difficult to find the proper medication for so many different kinds of people.

Anxiety disorders are commonly treated with anxiolytics like Valium, which are sedatives that calm the naturally hyperactive fight or flight system in those who suffer from anxiety disorders. For both depression and anxiety, most effective treatment often incorporates a combination of therapy and medication. Medication is used as a support in order to help people get their life back on track and therapy helps people create lasting habits to cope with their depression and anxiety.

There are many different kinds of therapy that can be used to help mental health disorders. Which therapy helps people the most can change according to their needs. CBT (cognitive-behavioral therapy) is the most common form that has been found to be effective for a variety of depression (ie. Major Depressive Disorder) and anxiety (OCD, Phobias, etc.) disorders. One of the most effective therapies, is ECT or electroshock therapy. ECT can be expensive and has been known to have been dangerous in the past. With new rules, regulations, and protocols in place for ECT, it is now one of the most effective treatments, working in almost 90% of depressed patients. Any kind of therapy requires a lot of work and effort on the part of the person who is suffering from a mental health disorder. Support from family and friends is often essential in encouraging people to properly adhere to their treatment plan; however, the possible benefit of a loved one’s improvement can prove worth the struggle.

If you or someone you know is struggling with a mental health disorder, like substance use disorders, please feel free to contact the professional team at Lifeline Connections for help! Getting yourself help, whether it is through self-help or by reaching out to professionals is an important part of recognizing that you are struggling and is a good step forward to get the help that you need. You can visit Lifelineconnections.org or call 360.397.8246 for more information.