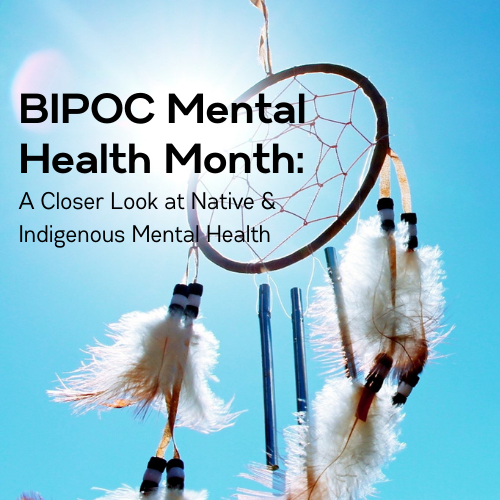 As we continue the journey through BIPOC Mental Health Month we’ll explore each community in more detail. This week we look at the statistics for Native and Indigenous mental health.

There are 574 federally recognized Native American tribes and Native/Indigenous people in the United States that speak over 200 indigenous languages.

The majority of Native Americans live in the mid-west or western states and about two-thirds live in non-reservation areas such as urban or suburban communities.

Mental Health and Substance Use

Currently 1.3% of the United States population identifies as Native American or Alaskan Native. Last year there was over 19% report having a mental health condition in the last year which came to over 827,000 people.

They also report experiencing serious psychological distress 2.5 times more than the general population. The overall suicide rates are similar to those identifying as non-Hispanic white people, but the age range is 15-19, which is much younger.  Substance use and other drugs are used and overused at younger ages and at higher rates than all other groups.

Native/Indigenous people have many different meanings and interpretations of how and why mental health conditions arise. Additionally they express emotional distress in ways counselors aren’t familiar or aren’t common. This group is also more likely to seek help from a spiritual healer than from a medical doctor.

Health insurance is also a reason for not seeking treatment. Nearly three times as many Natives (as compared to non-Hispanic whites) do not have insurance. Many rely on Medicaid or public coverage.

Lack of cultural understanding by health care providers is a big contributor. For instance, this includes language differences, stigma of mental health conditions and cultural presentation of symptoms.

What Can You Do?

Here you can find specific resources for mental health support and treatment specifically for the BIPOC community.

No matter what race or group you identify with, if you believe you have a mental health condition, reach out for help. There are mental health professionals here to work with you every step of the way and online support groups. Learn more about our mental health programs.

Wearing a face mask is still required when on site in any Lifeline Connections facility.